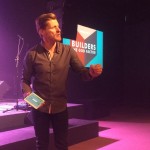 Do you know a “Yes Man” or a yes person? It’s not a title that is worn with pride in Australia, because it’s seen as weak and showing a lack personal conviction and character. People often take on that position because they see it as an easy way to personal gain, so in our Aussie culture it seems fake and lacks an honourable motive.

The danger is ‘we throw out the baby with the bath water’ and fail to engage the power of actually saying “Yes” and being a “Yes Person”.

When Jesus went to the cross for you and I, He asked, “Is there another way”? But there wasn’t, so His response was “not my will but yours Father…Yes I will go”.

Recently we’ve been on a journey together in seeing ourselves as builders, because we’re building people, families, churches, community’s and ultimately the Kingdom.

Together we’ve been learning from Nehemiah. The work in rebuilding the wall around Jerusalem progressed from a concern, to a conviction, to a vision. It became a reality when together the people said yes!

When we say a unified “yes”, a powerful work begins.

See you in Church!