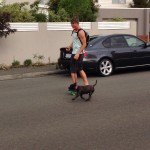 Everyone has something to say about something.
And I for one had something to say; I had a place for us to go. The journey was set and the destination was clear, but alas, such an odyssey was cut short and my thoughts became adjourned. There was no more moving forward, no more introspection, narrative or opinion.

Won over by the supremacy of writers’ block, my creative flow was barricaded behind a seemingly insurmountable wall. It was a battle far greater than these feeble hands could fight in a time of weakness and to crusade against such a force would be perilous. My tools were blunt and my hands were tied by impending deadlines and the juggles of daily conventions. My sight was scrambled and white noise scattered my clarity into chaos…

But I heard one drop.

Its drip emanated, echoing across the stillness of what was once a raging river of notion and design.
In one breath it whispered: “Be. Still.”

It was simple: no more pushing, no more fatigue.
Let unrestrained torrents pacify and in the stillness, let that one single drop become the author. Let its ripple manifest a story without the need for words, uttered with the intention to captivate and command everything in its path to remain calm.